Anyone involved in endurance sports (especially cycling) will no doubt be aware of the massive coffee culture. It’s what keeps so many cafes in Melbourne in business. To an outsider, the first question that springs to mind is “why do they do it?” No doubt the café is a big part of cycling culture, and is as much social as anything else. But what about the effect of caffeine on endurance performance? With caffeinated gels, sports drinks, tablets, energy drinks and of course coffee available to an athlete, let’s look at the science behind caffeine and performance.

How does caffeine work in the body?
Caffeine is believed to have several effects in the body. From a performance point of view the exact mechanism isn't well understood. Several years ago some studies suggested a role of caffeine during endurance exercise in increasing the ability of the body to burn fat. Increasing the body’s ability to burn fat and conserve carbohydrate at the same exercise intensity is considered by many to be the holy grail for endurance athletes, allowing the carbohydrate to be tapped into at the end of a race and beat your competition.
But more recently research disputes the role of caffeine in boosting fat utilisation during a race. Instead scientific consensus has swung towards a role for caffeine in the way that the brain regulates pace during exercise. It’s not clear exactly how this works (the science of the brain and exercise performance has barely scratched the surface so far) but it does seem to lower an athlete’s perception of effort for the same amount of actual physical output.
The graph below is from a study conducted by the Australian Institute of Sport and RMIT University in Melbourne, where highly trained cyclists and triathletes completed four cycling tests. They took caffeine in a sports drink either 1 hour before (PreCaf), in six doses during (DurCaf), a placebo or as Coke 100 minutes through a two hour ride at 82.5% of peak power output. The athlete’s Rating of Perceived Exertion (RPE) was measured throughout the two hours, and as you can see from the graph the group taking caffeine before the ride started and maintained a lower RPE throughout the ride compared to placebo, despite riding at the same power output. Likewise the RPE in the DurCaf group reduced below that of placebo from the 80 minute mark onwards. Those that switched to Coke at the 100min mark unsurprisingly had the same RPE as placebo, as they didn’t take the caffeine until the last 20 minutes. 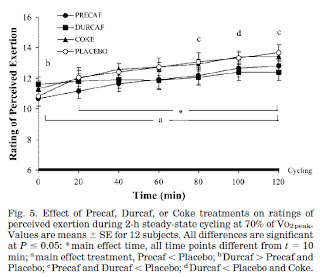 Source: J Appl Physiol 93:990-999, 2002.
What’s the effect on performance?
In the same AIS study the athletes followed the two hour fixed intensity ride with a time trial of a set amount of work, calculated to take around 30 minutes. This is when athletes were allowed to vary their pace, to measure performance. This pattern of “steady state” riding followed by a time trial is typical of many performance studies, simulating the typical pattern of work in a cycling road race.
During the time trial, the riders taking caffeine completed the ride around one minute faster compared to when they took the placebo. There was no statistical differences in performance between taking the caffeine before or during (or as Coke towards the end of) the steady state. Overall the benefit from caffeine consumption was around 3-3.5%. 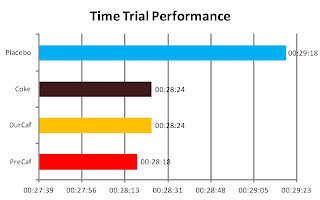 Figure 2: Results of the 7 kJ/kg Time Trial (in minutes) following 120 min of steady-state cycling at 82.5% of peak power output.
Placebo = Capsules not containing caffeine taken 1 hour prior to the ride.
Coke = 2 X 5mLkg body weight of Coca Cola consumed from 100-120minutes of the steady state ride. Total caffeine = 1mg/kg.
DurCaf = Capsules containing 1mg/kg caffeine taken every 20 minutes during the steady state ride (total of 6mg/kg).
PreCaf = Capsules containing 6mg/kg caffeine taken 1 hour  prior to the steady state ride.
Drawn from results in J Appl Physiol 93:990-999, 2002.
﻿
A number of studies have followed on caffeine and performance. The vast majority show a benefit from caffeine consumption of between 2-5% across a range of protocols and doses.
What’s the optimal dose of caffeine to improve performance?
Most of the earlier studies on caffeine and endurance performance used very high doses, up to 6mg per kilogram of body weight. To put that in perspective, for a 70kgathlete that’s 420mg of caffeine or the equivalent of over 5 cans of Red Bull! More recently however studies have shown the same performance benefits from half that dose, and 3mg per kg is now generally accepted as the highest dose needed to provide a benefit.
Here’s the amount of caffeine in a variety of foods and sports nutrition products:
·        Coca Cola – 1 X 375mL can = 49mg
·        Red Bull – 1 X 250mL can = 80mg
·        No Doz tablet – 1 X tablet = 100mg
·        PowerBar caffeinated gel – 1 X gel = 50mg
·        Torq gel – 1 X gel = 89mg
·        Coffee – Varies (see below)
The caffeine content of coffee is difficult to quantify, because it varies dramatically. In 2007 a team from Griffith University on the Gold Coast published a study where they purchased 97 short blacks from various coffee shops in the area. Their analysis found that the caffeine content varied from 25-214mg per cup, with an average of 106mg.
Do I need to stop drinking coffee in the lead up to a race to get the benefit of caffeine?
In 2011 the same team at Griffith University did a study where regular coffee drinkers were asked to either abstain from caffeine for four days before a cycling time trial, or continue to consume 3mg/kg each day from capsules. They were then given 3mg/kg on the morning of the time trial. The results in both groups were identical – a benefit of 3-3.6% from taking caffeine before the time trial, with no difference between those who abstained from caffeine for four days compared to those who didn’t.
Does caffeine work for everyone?
One of the interesting findings by those who have done research on caffeine and endurance performance is that there seems to be a large variation in how people respond. Whilst the average benefit seems to be around 2-5% in most studies, there are some athletes that have shown no improvement or even performed worse when taking caffeine compared to placebo. No one really knows why this is the case, but it highlights the need to try caffeine in training before you use it for an important race.
It’s also important to note that some people experience side-effects from caffeine at the doses that have been shown to improve performance. These include increased heart rate, anxiety and reduced ability to perform precision type tasks (which may be important in some endurance sports), as well as difficulty sleeping after training or competition.
Is caffeine banned in sport?
No. In 2004 the World Anti-Doping Authority removed any restrictions on caffeine, and it no longer appears on the prohibited list.
Summary
In endurance sports, low to moderate doses of caffeine (up to 3mg/kg) appear to improve performance by an average of around 2-5%. Exactly how caffeine works is still not fully understood, but it’s believed to play a role in the way the brain regulates fatigue and pacing during exercise. A variety of sports foods and supplements contain caffeine and the benefits can be obtained by taking it before or during a training session or race.
Be aware though that not everyone benefits from caffeine and some will experience side effects even at these moderate doses. Like all sports nutrition strategies make sure you try caffeine in training before using it in a race situation.
﻿