Ironman Nutrition – Could your eating & drinking make you ONE HOUR FASTER?

Here in Melbourne everyone’s starting to get excited about the upcoming Ironman Asia-Pacific Championship, which is just a few weeks away. I’ve got several clients fine tuning their preparations for March 25th. So I thought it’ be a good time to look at the influence that nutrition can have on an Ironman performance.
In the past I’ve worked with many clients to improve their Ironman nutrition, and the results have been fantastic. Some have smashed Personal Bests by well over 30 minutes, and the feedback is usually along the lines of “it was hard to get used to this nutrition strategy, but when I did it made a massive difference”.
So I then went back through the sports nutrition research literature and decided to look at just how much difference a well executed eating and drinking strategy can make. The end product is this collection of Ironman nutrition strategies, which when executed properly could slash up to ONE HOUR off your Ironman finishing time.


A quick comment about the research
Before I delve into the strategies that can make a difference on race day, I thought it wise to make some general comments about the quality of research this is based on. Despite the surge in popularity of ultra endurance sports, the majority of studies on “endurance performance” centre on exercise durations of less than four hours. Why? Well put it this way, how would you like to turn up to a lab every weekend for four weeks, exercise on a bike ergo or treadmill at race pace in a laboratory whilst breathing through a mask and having blood samples taken, then be motivated enough to give your best possible performance? Now imagine doing this for 8 hours?  It’s unlikely that you’d get many athletes willing to subject themselves to that sort of torture, and even if they did it’s unlikely that they’d stay motivated enough to give a true performance over that duration outside of real competition.
Why does this matter? Because we don’t know for certain how the benefits found in performance over 2-4 hours translate into performance over an Ironman. The benefits in some cases may be smaller than what I’ve suggested here (my hunch is that this might be true for carbohydrate loading, caffeine and nitrate supplementation), whilst others might be greater (probably for adequate hydration and optimal carb intake during the race). But this is based on my personal opinion and estimations, as the research simply doesn’t exist to guide us.
But assumptions aside, let’s get into the exciting part – analysing how you could go up to an hour faster on March 25th.
Carbohydrate Loading – Arriving at the start line with muscles full of carbs
In my experience carbohydrate loading is well known but poorly executed by the majority of triathletes. Most simply have no idea exactly how much carbs you need to eat to do it properly. Having measured dozens of athletes at triathlon training camps, the majority eat around 5-6 grams of carbohydrate per kilogram of their body weight the day before a race. But to carb load properly before a big race you’ll need to eat 8-12 grams per kilo. For most people this is takes an enormous amount of food compared to their usual diet – click here to read a previous post which shows you what it looks like in food.
The performance benefits from carbohydrate loading have been measured in a few studies. They find a benefit of around 3-4% to performance over durations of 2-3 hours. We don’t know exactly what that’d translate to in an Ironman, but my guess is that the effect would be a bit less because the 500g or so of carbohydrate that you’ve stored will have to be rationed out over a longer duration. But it’s a good starting point, and if you arrive at the start line of IM Melbourne properly carb loaded you’ll definitely have an advantage over those who just “ate a bowl of pasta the night before”.
Approximate time saved over an 11hour Ironman (compared to moderate carb loading): 20-25min
Carbohydrate during the race
The science of carbohydrate intake during ultra-endurance racing has come forward in leaps and bounds over the last 10 years, mainly due to work from the University of Birmingham (and confirmed by others) showing a benefit to performance of a combination of carbohydrate types, when consumed in very large quantities (over 60 grams an hour and up to 120 grams an hour).
The main points from this work are:
So how much benefit do high carb intakes from a glucose and fructose combination provide? The lab studies suggest the benefits can be enormous, at least over 3 hours of exercise – as much as 18% faster than consuming no carbs at all, and 8% faster with 90g an hour of a glucose/fructose mix compared to 90g an hour of glucose only.
The final piece in this puzzle is some observations from the 2009 Ironman Germany and the 2009 Ironman World Championships. Researchers measured the carbs consumed by 107 athletes across the two events, and found a correlation between the amount of carbs consumed and finish time (see the graph below). In fact 30% of the variation in finish time in Hawaii and 20% of the variation in Germany could be explained by the quantity of carbohydrate consumed alone. 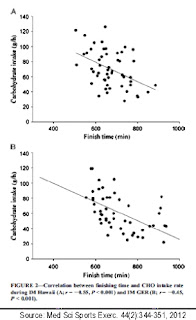