So you’ve prepared well for your endurance event. You’ve carb loaded, you’re well hydrated and ready to go. But nutrition during the event will still play a big part in how well you’ll perform. The amount and type of carbohydrate you eat and drink during exercise is an important part of your race strategy, and in today’s post we’ll look at the latest research and what it tells us about it.

Carbohydrate and fatigue during a race
Until the last few years, the thinking about eating and drinking during exercise was that you simply needed to eat enough to prevent severe fatigue from ruining your race. The idea was that you used carbohydrate until you ran out, and extra carbs during exercise would prolong this process. Running out of carbs causes hypoglycaemia (low blood sugar), often referred to by athletes as “hitting the wall”, “bonking” or “hunger flatting”.
However more recent research shows us that athletes will unconsciously adjust their pace quite early during a race to try and prevent hypoglycaemia, with more experience over that distance resulting in better pacing and less likelihood of hypoglycaemia.
The more carbs you eat, the faster you’ll go
The really interesting and useful part of this is that by maximising the amount of carbohydrate you can get in during a race, the more aggressively you can pace yourself without running out and therefore the faster you can go. A good example of this is in Ironman triathlon, where some recent research has shown a direct link between the amount of carbohydrate eaten during a race and finishing time, with the athletes who consume the most carbs per hour finishing the fastest.
So if more carbs will make you faster, how much can you eat during exercise?
Maximising your carbohydrate
This is another area where research has changed the recommendations over the last few years. The majority of sports nutrition text books will still tell you to eat between 30-60 grams of carbohydrate per hour. The theory was that your gut can only absorb up to 60g an hour, and any more than that will not be absorbed and will increase gastrointestinal discomfort. However the problem with this theory is that it was based on research that used only one type of carbohydrate – glucose.
When we eat carbohydrate (starch and sugar), all of it is broken down into three sugars – glucose, fructose and galactose. These sugars are then absorbed from the small intestine and into the blood through transporters in the intestinal wall. Glucose and galactose are both absorbed through the same transporter (called SGLT1 or Sodium Dependent Glucose Transporter). The galactose is slowly absorbed, and therefore not relevant to sports nutrition. However fructose is absorbed through a completely different transporter (GLUT5), allowing greater amounts of total carbohydrate to be absorbed when carbs are being absorbed through both transporters at the same time. And researchers have now shown that carbohydrate can be consumed in quantities much greater than 60g an hour with no issues with tolerance and an improvement in endurance performance. 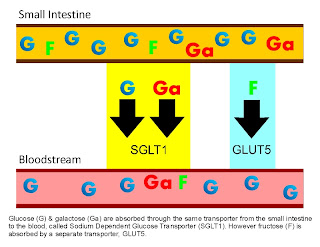 At the University of Birmingham researchers showed that whilst glucose absorption is maximised at about 60 grams an hour, fructose can be added and absorbed in significant quantities too. Their research has shown absorption of up to 120g of carbohydrate an hour in total, provided it’s a combination of glucose and fructose.
Interestingly some ultraendurance athletes were doing this long before there was research to prove it. In a recent study at the Hawaii Ironman triathlon, athletes were consuming up to 136g of carbohydrate an hour during the race.
The Proof is in Performance
The first study to measure the performance benefits of combining carbohydrate types was published in early 2008. In the study athletes cycled for two hours at 55% of their maximum power output, followed by a time trial in which the distance calculated was from the equivalent of 75% of their maximum power output for 60min. The participants in the study drank water (no carbs), glucose only at 108g an hour or a combination of glucose (72g an hour) and fructose (36g an hour, 108g an hour total carbs). Those drinking the glucose only drink completed the time trial 10% faster than when drinking water. When they drank the glucose and fructose drink they completed the time trial 8% faster than with glucose alone, and a massive 19% faster than with water!
Other studies have confirmed these results. A study from Georgia State Univeristy showed that cyclist drinking a whopping 144g an hour of carbohydrate an hour in a combination of glucose and fructose (72g/hr glucose and 72g/hr fructose) completed a 100km time trial 16 minutes (7.3%) faster compared to 144g an hour of glucose only.
In addition, further research has shown further benefits of the glucose/fructose combination, which include increased rate of stomach emptying and greater uptake of fluid compared to glucose alone.  One thing to note however is that the beneficial effect of the carbohydrate combination only occurs when total carbohydrate consumption is greater than 60g an hour. If you’re not consuming this much carbs than the type won’t make a difference.
Translating the Science into Food
So how do we translate this into food during exercise? Firstly, we know that the effect is the same no matter whether the carbohydrate comes from drinks, gels or bars. So you can use any of these to get your carbs. Secondly, despite the research until recently being conducted with glucose only, the majority (but not all) sports drinks, bars and gels already contain some combination of glucose and fructose in one form or another. A couple of brands (High 5, PowerBar and Torq) produce some or all of their products based on a 2:1 ratio of glucose to fructose. This is designed to achieve roughly the desired amount of the two sugars, although it’s the total amount of each (not the ratio) that’s important.
Let’s have a quick look at the common carbohydrate content of sports nutrition products:


So to achieve 90g of carbs an hour or more we’d need a combinations like these:
These don’t look particularly realistic (or cheap) for your average athlete. My suggestion here is to make up your sports drink at 1 ½ strength (9%) or even double strength (12%) if you can tolerate the taste. Then the equation becomes much more practical:

Please note that the amount of fluid required will vary according to the weather conditions, your sweat rate and intensity of exercise. It is recommended that you develop an individualised hydration plan in conjunction with a sports dietitian to optimise performance and minimise the risk of dehydration or over-hydration (hyponatraemia).
Products to be careful with at these quantities
As mentioned before, the majority of products on the market contain a combination of glucose and fructose. However some contain glucose or a starch of glucose (maltodextrin) only. These products are often marketed as “sugar free” because they contain only starch, but the problem is that they will not give you the advantage of the carb combination, unless they are combined with other products which have the combination. So when you look at gels and sports drinks, look out for those that do not contain any sugar, fructose or sucrose. These may cause gastrointestinal problems if consumed in quantities much over 70g an hour.

If you do have fructose malabsorption, often fructose can be tolerated when eaten together with the same or larger quantities of glucose (as is recommended here for sports performance). However some people are very sensitive to fructose and this approach may still not prevent symptoms. There is no research into the effect of exercise for people with fructose malabsorption - we don't know if this makes symptoms better, worse or the same as at rest. If you struggle to tolerate sports nutrition products that contain fructose, choose those that contain only glucose or maltodextrin, and consume them in quantities of 60g of carbs an hour or less.
Summary
Starting an endurance event (duration longer than 2 hours) completely carbohydrate loaded will give you a significant advantage for that event compared with not properly carb loading. However the amount of carbs you can consume during a race will also make a big difference, particularly in longer events. Research shows that combining both glucose and fructose (or the starches that digest down into these sugars) allows more carbohydrate to be absorbed from the small intestine, and therefore improves endurance performance by 5-10% compared to consuming glucose only.

Until recently recommendations were to consume 30-60g an hour of carbs during endurance exercise, but observation of endurance athletes and newer research shows us that you can consume much greater quantities (up to 140g an hour) with minimal problem, provided you utilise the combination of glucose and fructose. People with fructose malabsorption may not be able to tolerate the fructose component of sports foods and drinks, although there's no research during exercise to see what the effect is.
From a practical perspective, most but not all products already contain some combination of these sugars. However to practically achieve these large carbohydrate intakes it is likely that you’ll have to make up sports drinks in much greater concentrations than what is normally recommended by the manufacturers.
Finally, be aware that eating this amount of ultra-sweet tasting food is not always liked or well-tolerated. It may take quite a bit of getting used to, but the results are well worth it if you can do it.