So firstly, we know that carbohydrate is the preferred fuel during sports where athletes are working at a moderate to high intensity. But how do we define what carbohydrate is, and which foods will give it to us? Carbohydrate is essentially the starch and sugar in food. Starch is simply a chain of sugar molecules joined together. In a chain these molecules don’t taste sweet (eg. wheat flour), but when they exist as a single molecule of sugar or just two linked together they taste sweet. For example the sugar that we add to coffee and tea is sucrose, which consists of two sugar molecules joined together. 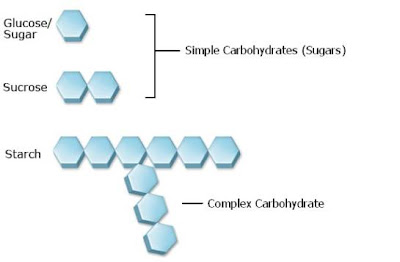 All carbohydrates are combinations of three sugars

There are lots of different types of carbohydrate in different foods, but by the time they’re digested they will end up as one of three sugars – glucose, fructose and galactose. Glucose is the most common of these sugars, and makes up the majority of the carbohydrate once it’s digested. Fructose exists naturally as sugar in fruit and honey, and forms part of the starch found in wheat starch and some vegetables (particularly the onion and garlic family). Galactose is one half of the sugar lactose, found in milk and products made from milk.

If we now look at which foods give us carbohydrate, you can see that it’s a pretty big range. Carbs come from anything that includes the starch from grains (wheat, rye, barley, oats, corn and rice), which includes breakfast cereals, bread, pasta and rice. Starchy vegetables such as potato, sweet potato, corn and legumes (baked beans, lentils, chickpeas, etc.) also contain starch. Fruit contains the sugars glucose and fructose, while milk and milk products (depending on how they’re made) contain the lactose. Finally, any food that includes either starch or sugar as an ingredient by definition will give you carbohydrate. This includes cakes and biscuits (flour and sugar), potato chips (potato starch), lollies, cordial and soft drinks (sugar) and chocolate (sugar).
There are some foods that give us minimal or no carbohydrate. Meat, fish and chicken do not contain any starch or sugar. Neither does cheese (the lactose is converted to lactic acid during the process of making it), eggs, nuts (they contain some but aren’t a good source) and non-starchy veggies and salad veggies (eg. broccoli, lettuce, tomato, etc.).

The amount of carbohydrate in food can be worked out from the label on packaged foods, or from internet databases such as CalorieKing. When you look at a food label have a close look – you’ll see that sugars is actually a subset of carbohydrate, just like saturated fat is a subset of total fat. Ultimately it’s the total carbohydrate that matters, not the sugars.

One thing I want to point out at this stage is that there are very few foods that are “protein foods” or “carbohydrate foods”. Most foods contain a combination of nutrients, not just carbs or protein. For example a slice of bread provides around 15 grams of carbs, but also 3 grams of protein. But we don’t normally think of bread as a “protein food”. Likewise 1 cup of low fat milk contains 10 grams of quality protein but also contains 14 grams of carbs. The only foods that contain carbohydrate but no other energy sources are refined sugar products such as lollies, soft drink and cordial. Pure fat comes from butter and cooking oils, and the closest thing to a protein only food is very lean meat, fish and chicken (as well as refined pure protein powders).


How does the carbohydrate from food become a fuel source?

So what happens to all this carbohydrate once we’ve eaten and digested down into glucose, fructoe and galactose? Like all nutrients from food, these three sugars are absorbed across the wall of the small intestine and into the bloodstream by “transporters”, channels in the gut wall that are designed to let specific things through and keep the nasties out. These transporters become important when we look at eating during ultra endurance exercise, but that’s a story for another post.

Once the sugars enter the blood, they have different fates. Fructose and galactose are taken up in the liver and converted into glucose. Glucose continues to travel around in the blood. This additional glucose in the blood raises your blood glucose level, requiring the body to deal with the surge of glucose that occurs every time you eat a carbohydrate containing meal. To do this your pancreas makes a hormone called insulin, which acts on more transporters, this time to get glucose out of the blood and into the body’s cells, where it can be used as a fuel to produce energy. Excessive glucose is stored in our muscles as well as a small amount in the liver. This stored carbohydrate is known a glycogen, and this precisely the thing that you try to maximise by carb loading.

Contrary to popular belief, carbohydrate eaten when you are not active does not get converted to fat, it’s stored as glycogen. The only time that the body will convert carbohydrate into fat is when you’ve completely filled your storage capacity for glycogen in the muscles, and you’re still eating more carbs. This is incredibly difficult to do for anyone doing regular exercise. The only time this would happen to a significant extent is when you have someone not exercising and over-consuming carbs – for example a couch potato who consumes a lot of high carbs foods (eg. lollies, starchy foods, soft drink, etc.). So don’t worry about eating carbs at night, it’s a myth and a bit silly when you think about it. Why would athletes go to all the effort of carb loading if it just made them fatter?

That’s not to say overeating carbs doesn’t have an indirect effect on body fat levels. When you eat carbohydrate it’s still an energy source that the body has to either burn or store. This means that if it uses up some of this carbohydrate as a fuel source (which increases after you eat carbs), it spares the equivalent amount of stored fat that might have been otherwise burnt up. So whilst carbs don’t technically store as fat and the time you eat them doesn’t make any difference, they still contribute to the total energy you’re eating and hence your weight.

So that’s the rundown on carbohydrate. For the next blog I’ll take a closer look at protein – where we get it from, what we use it for other than producing energy, and how much do we need to maximise the benefits of training.