A couple of weeks back I found myself in chilly Canberra, attending the Sports Dietitians Australia One Day Update. This year the update was a little different to previous events; with the London Olympics less than a year ago (and being in the home town of the AIS) it was a great chance for the sports dietitians who worked with our Olympic team to reflect on what they’ve learnt over the past four years, and look ahead to Rio in 2016.


There were four presentations on the day, all from the sports nutrition team at the AIS. First up was their Head of Sports Nutrition, Prof. Louise Burke. Louise presented an overview of the thought processes their team goes through each Olympic cycle, and how they decide where to concentrate their efforts from a research and support perspective.

London was quite different to the last few Olympics where Australia had enjoyed so much success - Atlanta, Athens and Beijing all featured heat as a major factor. Athens and Beijing had the added complications - non-English speaking cultures, and dealing with food hygeine issues to prevent athletes from getting sick (especially in Beijing). The only significant challenge anticipated for London was the coincidence of Ramadan during the time of the games, however it turned out that no Australian athletes participated in the Muslim ritual of fasting and feasting.

The insights into the AIS approach to nutrition for an Olympic cycle were particularly interesting. First of all, the team looked at the emerging sports nutrition strategies that warranted further research between Beijing and London. This included:
Other areas were seen as being of interest, but could not be further investigated due to resource limitations:
The team also paid close attention to the program of events for London - what's new, and how the schedule for some events had changed. Track cycling was one such example - gone was the individual pursuit, replaced by the multi-event omnium. But the area that the team chose to focus on was the teams pursuit, in which Australia and Great Britain were locked in a four year battle for supremacy which saw both teams lower the world record in the years leading up to London. The teams pursuit scheduling had changed from its traditional format, so that there was only one hour and fifteen minutes between semi-finals and the gold medal event at London. This led the AIS to research whether it was better to take beetroot juice before the semi-final, before the gold medal event, or before both. Their findings suggested that taking beetroot juice before the semi-final could potentially hinder performance in the gold medal event (presumably because riders went too hard in the semi), and prompted a change in their protocol with the team.

Louise went on to present a case study of one of the athletes she worked with, race walker Jarrod Talent. With a new race nutrition strategy (consuming around 90g/hr carbohydrate) Jarrod achieved a personal best in the 50km event and finished with the silver medal, less than one minute behind the existing world record holder (who broke the Olympic Record on the day).

The second presentation was from the AIS Food Service Dietitian, Jo Mirtschin. Jo presented on her experience in London, where she got a last minute call up to cater for 22 members of the Olympic rowing team that were staying together in a rented house next to the event venue. The team chef who was due to do this job had to pull out, leaving Jo with only two weeks to prepare. Jo outlined her approach to menu planning, stock management, and pulling it all together in the kitchen. The rowing team that stayed in the house benefited from what they felt was a much more home-style catering than what they'd experienced, coming off several months of travelling in Europe prior to the games. Three of the crews in the house returned home with medals.

The third presentation was from the Australian Rowing dietitian, Bronwen Lundy. Bronwen presented on the subject of energy availability, and the effect of under-nutrition on the health and performance of athletes. Energy availability is the concept that when energy is used for one body function (eg. in the muscles for exercise) that it is not available for other functions (reproductive function and bone metabolism). If the energy available to the body for those key functions is restricted, hormonal changes (eg. altered or no menstrual cycle in women), a lowered Resting Metabolic Rate and a loss of bone density can result, increasing the risk of stress fractures in athletes, or osteoporosis later in life. In the lightweight rowing squad it was felt that at least two medals may have been lost due to rib stress fractures, resulting from chronic under-nutrition in these athletes who must meet a specific body weight for competition. Whilst this problem was originally thought to only apply to athletes in weight restricted sports (eg. jockeys, lightweight rowers, martial arts, boxing) and aesthetic sports (eg. gymnastics, synchronised swimming), there is now a realisation that this can also be a problem due to large training loads that are not compensated for in the diet (eg. heavy blocks of endurance training in runners, triathletes and cyclists).

The only solution to low energy availablity is to increase the calories in the diet to better match what's being used. Bronwen suggested from experience that any body fat gain can be minimised by very gradually increasing the calories, rather than a sudden, large increase. She also recommended regular (eg. once a year) Bone Mineral Density testing for those who are thought to be at risk.

The final presentation for the day was from Alison Garth. She presented four examples of supplement research and refinement undertaken by the AIS between Beijing and London. Firstly, beta-alanine was studied for its effects with the national swimming team. Beta-alanine is a buffer supplement, allowing athletes to sustain very high intensity exercise for longer. Beta-alanine or a placebo was taken over a ten week training block, and pre and post performance testing occured. Interestingly they found no difference in performance at the end of the ten week training block. Their explanation was that beta-alanine may have allowed the swimmers to push harder in training, but because their training was not adjusted for this the swimmers may have missed out on the potential capacity gained from the supplement. Future studies may focus on whether or not beta-alanine allows athletes to train harder, and if that ends up translating into performance improvements over a period of time.

The second supplement looked at was caffeine. In the mid-2000's a variety of studies emerged suggesting that the large caffeine doses used in earlier studies was not required to achieve performance benefits. The team then went about re-educating athletes, and changing their pre-event protocols to lower the caffeine levels to around 1-3mg per kilogram of body weight, using a variety of sports food products to achieve this (mainly gels and drinks). They even tried caffeinated gum (not available commercially in Australia) with some athletes, but the feedback was mixed. Some people really liked it, other people didn't like chewing gum or reported an unpleasant aftertaste.

The third supplement looked at was bicarbonate. Another buffer, bicarbonate was in regular use with the swimming team, but there was no research available to know whether the pre-race warm up reduced the effectiveness of the taking bicarb before a race. It was found that the warm-up possibly had a small effect on blood bicarb levels, and based on these results the doses and protocols were adjusted for each individual athlete in an attempt to optimise their race performance.

The fourth and final supplement invetsigated was beetroot juice, and the study described above for the teams pursuit was the example given.

Alison finished by looking ahead to the 2016 Olympics in Rio, and focussed on three potential areas:
Overall it was a great day in Canberra, and a chance to hear what the AIS have been working on for the last four years. The next Sports Dietitians Australia event will be the national conference in October, where I've been invited to present on the practical application of nutrient timing, and matching eating plans to an athlete's training schedule. There's an amazing lineup of other speakers, covering the areas of body composition, nutrient timing and the science of sports nutrition. I'm looking forward to it already. 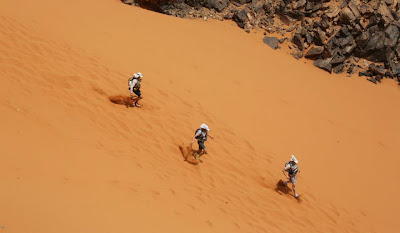